How to Run HAProxy with Docker 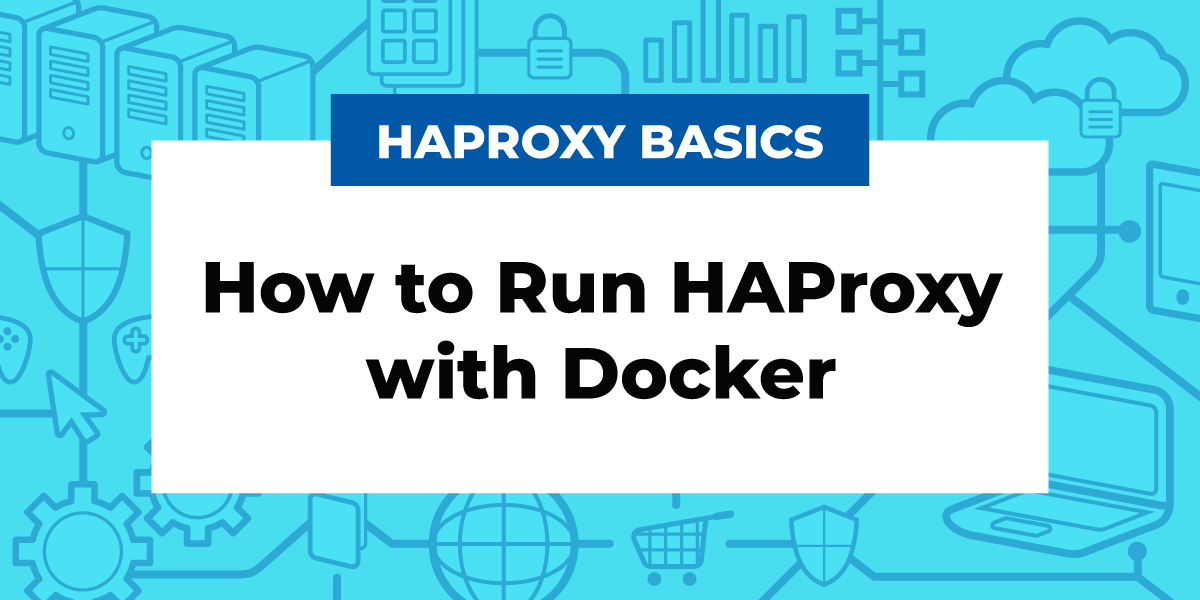 Can you run HAProxy as a Docker container? Yes! Did you even need to ask? Docker is ubiquitous these days and you’ll find that many applications have been Docker-ized; the HAProxy load balancer is no exception. Pardon the cliché, but HAProxy was born for this. As a standalone service that runs on Linux, porting it to Docker certainly seemed natural.

Why would you want to run your load balancer inside of a Docker container? Are their performance penalties when doing so? Will it introduce any security issues?

In this blog post, you’ll learn why you might consider running HAProxy inside a container and what the ramifications could be. Then you’ll see how to do it. Note that we are covering how to run HAProxy, not the HAProxy Kubernetes Ingress Controller.

HAProxy Technologies builds its own set of Docker images under its namespace haproxytech. These are updated regularly with the latest patches and security updates. I will be using those images in this blog post. You’ll find them here:

The benefits of Docker

Do you want the ability to run HAProxy without needing to compile it, install dependencies, or otherwise alter your system?

Docker containers bring considerable benefits, chief among them being less ceremony around installation and execution. Docker allows you to drop a container onto a host system and instantly get a running service—no install scripts, no installing C libraries. The service is completely contained within the container and all you need to do is start it and then map a TCP port to it. When you deploy a container, you gain the ability to run an entire application complete with its runtime environment without ever actually installing it onto the host system.

Lifecycle management becomes standardized too. Starting, stopping, and removing a container are as easy as calling one-line docker commands. That in turn makes deployment a repeatable and testable process. It also lends itself to easier software upgrades.

The performance impact of running Docker

You want your load balancer to be fast, with no added latency from the environment. So, the question is, what is the impact of running HAProxy inside of a container?

In terms of CPU overhead, it helps to remember that, unlike a virtual machine, Docker does not require a layer of virtualization on top of the host operating system. A container runs on the host’s kernel and is basically just another process, albeit one with better isolation from other processes running on the host (it uses namespaces to accomplish this). It should come as little surprise then that a study by researchers at IBM found that the CPU overhead of using Docker is negligible.

Networking is another story. By default, Docker lets you access the services running inside containers by creating a bridge network to the host. This does incur latency due to the network address translation (NAT) that must happen between the container’s local network and the host’s bridge network. In the same IBM study cited before, the researchers found that Docker’s NAT doubled latency from roughly 35 µs to 70 µs for a 100-byte request from the client and 200-byte response from the application.

On the other hand, bridge networks are useful because they allow you to isolate groups of containers into a container-only network and expose only some of those containers to the host, which is handy for reducing the number of IP addresses required on your host’s network (think about the number of IPs required to run hundreds or possibly thousands of containers). If you’re interested in learning more about how networking works in Docker, there’s a deep dive available from the Docker team that you can watch on YouTube.

If you require very low latency you can switch to using Docker’s host network feature, which allows your container to share the same network as the host, cutting out the need for NAT. Then again, that doesn’t touch on what to do if you want to run Docker Swarm or Kubernetes, which use overlay networks, for which different network drivers like Project Calico and Cilium have solutions. However, that is outside the scope of this article.

In short, unless you require very low latency, you should be fine sticking with the default bridge networking option. Just be sure to test it out and see if you’re getting the throughput you need.

You may be concerned by the fact that many Docker containers run their service as root, and this root user is the same root user as on the host system. Concerns about a container breakout are legitimate. HAProxy runs as root too. However, to put your mind at ease: HAProxy requires root access because it needs to bind to restricted TCP ports like 80 and 443. However, once it has finished its startup, it drops its root privileges and runs as an unprivileged user.

People also weigh the risk that a container may be malicious. This is a good reason to stick with the haproxytech Docker images, which are curated by HAProxy Technologies.

We’ll create three instances of a web application, one instance of HAProxy, and a bridge network to join them together. So, once you’ve installed Docker, use the following command to create a new bridge network in Docker:

Then use the docker run command to create and run three instances of the web application. In this example, I use the Docker image jmalloc/echo-server. It’s a simple web app that returns back the details of the HTTP requests that you send to it.

Notice that we assign each one a unique name and attach it to the bridge network we created. You should now have three web applications running, which you can verify by calling the docker ps command:

These containers listen on their own port 8080, but we did not map those ports to the host, so they are not routable. We’ll relay traffic to these containers via the HAProxy load balancer. Next, let’s add HAProxy in front of them. Create a file named haproxy.cfg in the current directory and add the following to it:

A few things to note:

Next, create and run an HAProxy container and map its port 80 to the same port on the host by including the -p argument. Also map port 8404 for the HAProxy Stats page:

If you make a change to your haproxy.cfg file, you can reload the load balancer—without disrupting traffic—by calling the docker kill command:

In this blog post, you learned how running HAProxy inside of a Docker container can simplify its deployment and lifecycle management. Docker provides a standardized way for deploying applications, making the process repeatable and testable. While the CPU overhead of running Docker is negligible, it can incur extra network latency, but the impact of that depends on your use case and throughput needs.

To run HAProxy, simply create an HAProxy configuration file and then call the docker run command with the name of the HAProxy Docker image. HAProxy Technologies supplies up-to-date Docker images on Docker Hub.

HAProxy Enterprise powers modern application delivery at any scale and in any environment, providing the utmost performance, observability, and security for your critical services. Organizations harness its cutting edge features and enterprise suite of add-ons, which are backed by authoritative, expert support and professional services. Ready to learn more? Sign up for a free trial.