Run the HAProxy Kubernetes Ingress Controller Outside of Your Kubernetes Cluster 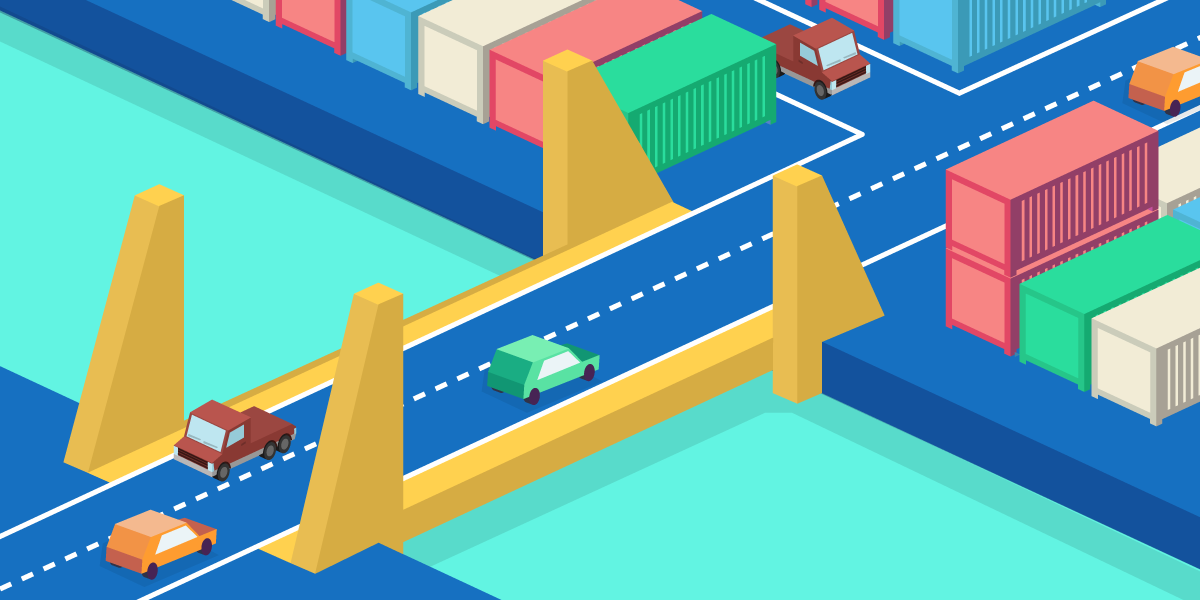 Join our webinar to learn more about running the ingress controller in external mode.

Traditionally, you would run the HAProxy Kubernetes Ingress Controller as a pod inside your Kubernetes cluster. As a pod, it has access to other pods because they share the same pod-level network. That allows it to route and load balance traffic to applications running inside pods, but the challenge is how to connect traffic from outside the cluster to the ingress controller in the first place.

Like other pods, the ingress controller lives inside the walled environment of Kubernetes, so clients outside can’t reach it unless you expose it as a Service. A Kubernetes Service creates a bridge to the outside world when you set its type to either NodePort or LoadBalancer. In cloud environments, the LoadBalancer option is more common, since it instructs the cloud provider to spin up one of its cloud load balancers (e.g. AWS Network Load Balancer) and place it in front of the ingress controller. Administrators of on-premises Kubernetes installations typically use NodePort and then manually put a load balancer in front. So, in nearly every case, you end up with a load balancer in front of your ingress controller, which means that there are two layers of proxies through which traffic must travel to reach your applications.

Looking for a deeper discussion of this topic? Watch our on-demand webinar, Kubernetes Ingress: Routing and Load Balancing HTTP(s) Traffic.

The traditional layout, wherein an external load balancer sends traffic to one of the worker nodes and then Kubernetes relays it to the node that’s running the ingress controller pod, looks like this: 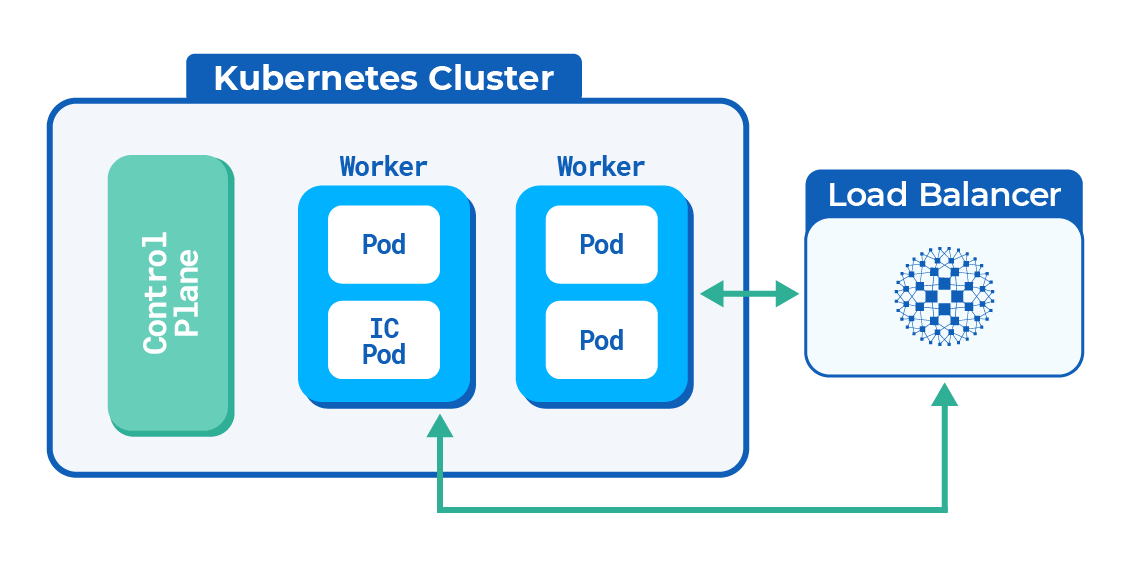 Beginning with version 1.5 of the HAProxy Kubernetes Ingress Controller, you have the option of running it outside of your Kubernetes cluster, which removes the need for an additional load balancer in front. It gets direct access to your physical network and becomes routable to external clients. The caveat is that now that the ingress controller is not running as a pod and is not inside the Kubernetes cluster, it needs access to the pod-level network in some other way.

In this blog post, we solve that problem by installing Project Calico as the network plugin in Kubernetes and then enabling Calico to share its network routes with the ingress controller server via BGP peering. In a production environment, this BGP peering would be to a Layer 3 device in your network, but for this demonstration, we use the BIRD internet routing daemon as a router, installed onto the same VM as the ingress controller.

The diagram below describes this layout, wherein the ingress controller sits outside of the Kubernetes cluster and uses BIRD to peer with the pod-level network: 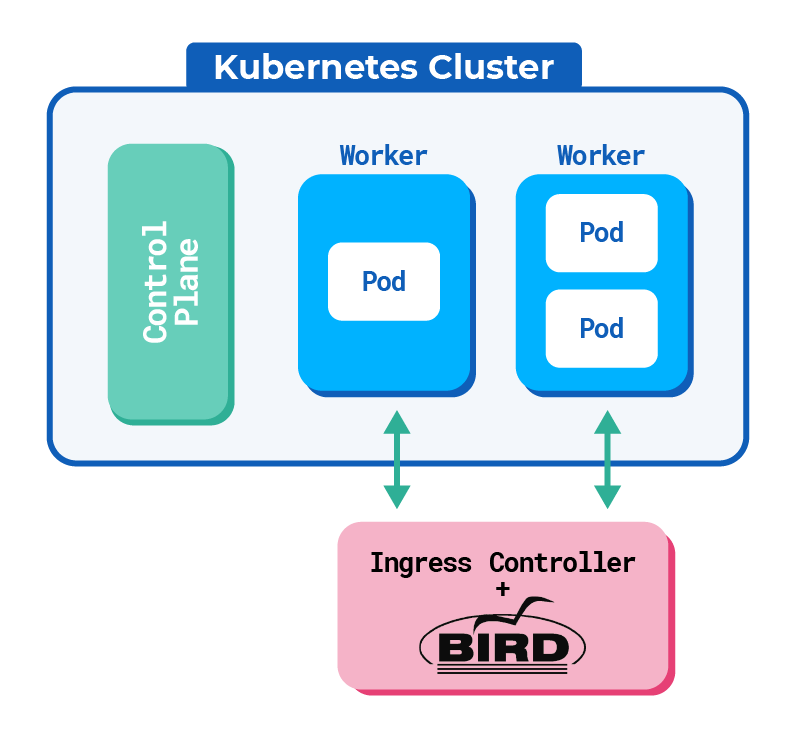 To follow along with the examples, download the demo project from GitHub. It uses VirtualBox and Vagrant to create a test lab that has four virtual machines. One VM runs the ingress controller and BIRD while the other three form the Kubernetes cluster. Once downloaded, call vagrant up from within the project’s directory to create the VMs.

We’ll step through how we run the HAProxy Kubernetes Ingress Controller externally and how to set up the Kubernetes cluster with Calico for networking.

The demo project uses Vagrant and VirtualBox to create four virtual machines on your local workstation. Three of them constitute the Kubernetes cluster:

Vagrant automates much of the setup by calling a Bash script that runs the required commands to install Kubernetes and Calico. For those of you wondering why we need to install Calico, you must remember that Kubernetes is a modular framework. Several of its components can be swapped out with different tooling as long as those components implement the required interface. Network plugins must implement the Container Network Interface (CNI). There are several popular options including Project Calico, Flannel, Cilium, and Weave Net, among others. Calico’s BGP peering feature makes it an attractive choice for our specific needs.

Check the project’s setup_kubernetes_control_plane.sh Bash script to see the details of how the control plane node is provisioned, but at a high level, it performs these steps:

The two worker nodes are initialized with a Bash script named setup_kubernetes_worker.sh, which performs the following steps:

The part that installs Calico on the control plane node is particularly interesting. The script installs the Calico operator first, then creates a Kubernetes object named Installation that enables BGP and assigns the IP address range for the pod network:

Next, it installs the calicoctl command-line tool and uses it to create a BGPConfiguration and a BGPPeer object in Kubernetes.

The BGPConfiguration object sets the level of logging for BGP connections, enables the full mesh network mode, and assigns an Autonomous System (AS) number to Calico. The BGPPeer object is given the IP address of the ingress controller virtual machine where BIRD will be running and sets the AS number for the BIRD router. I’ve chosen the AS number 65000. This is how Calico will share its pod-level network routes with BIRD so that the ingress controller can use them.

The Ingress Controller and BIRD

In the demo project, we install the HAProxy Kubernetes Ingress Controller and BIRD onto the same virtual machine. This VM sits outside of the Kubernetes cluster where BIRD receives the IP routes from Calico and the ingress controller uses them to relay client traffic to pods.

The ingress controller should be running already because it is configured as a Systemd service. Its service file executes the following command:

The --external argument is what allows the ingress controller to run outside of Kubernetes. Already, it can communicate with the Kubernetes cluster and populate the HAProxy configuration with server details because it has the kubeconfig file at /root/.kube/config. However, requests will fail until we make the 172.16.0.0/16 network routable.

Calico is equipped to peer with BIRD so that it can share information about the pod network. BIRD then populates the route table on the server where it’s running, which makes the pod IP addresses routable for the ingress controller. Before showing you how to configure BIRD to receive routes from Calico, it will help to see how routes have been assigned on the Kubernetes side.

To give you an idea about how this works, let’s take a tour of the demo environment. The virtual machines have been assigned the following IP addresses within the 192.168.50.0/24 network:

Call kubectl get nodes to see that all nodes are up and ready:

Next, call calicoctl node status to check which VMs are sharing routes via BGP:

The last two lines, which have the IP addresses 192.168.50.23 and 192.168.50.24, indicate that the worker nodes that have established a BGP connection are sharing routes with one another. However, the first line, 192.168.50.21, is the ingress controller VM and its connection has been refused because we haven’t configured BIRD yet.

Calico has assigned each of the worker nodes within the Kubernetes cluster a subset of the larger 172.16.0.0/16 network, which is an overlay network on top of the 192.168.50.0/24 network. You can call kubectl describe blockaffinities to see the network ranges that it assigned.

The Kubernetes control plane will schedule pods onto one of these nodes.

To configure BIRD, SSH into the ingress controller VM:

Edit the file /etc/bird/bird.conf and add a protocol bgp section for each worker node. Notice that the import filter section tells BIRD that it should import only the IP range that’s assigned to that node and filter out the rest.

Restart the BIRD service to apply the changes:

Let’s verify that everything is working. Call birdc show protocols to see that, from BIRD’s perspective, BGP peering has been established:

You can also call birdc show route protocol to check that the expected pod-level networks match up to the VM IP addresses:

You can also check the server’s route table to see that the new routes are there:

If you go back to the control plane VM and run calicoctl node status, you will see that Calico also detects that BGP peering has been established with the ingress controller VM, 192.168.50.21.

With BGP sharing routes between the Kubernetes cluster and the ingress controller server, we’re ready to put our setup into action. Let’s add an Ingress object to make sure that it works. The following YAML deploys five instances of an application and creates an Ingress object:

Deploy the objects with kubectl:

Open test.local in your browser and you will be greeted by the application, which simply prints the details of your HTTP request. Congratulations! You are running the HAProxy Kubernetes Ingress Controller outside of your Kubernetes cluster! You no longer need another proxy in front of it.

To see the harpoxy.cfg file that got generated, open the file /tmp/haproxy-ingress/etc/haproxy.cfg. It generated a backend named default-app-port-1 that contains a server line for each pod running the application. Of course, the IP addresses set on each server line are now routable. You can scale your application up or down and the ingress controller will automatically adjust its configuration to match.

In this blog post, you learned how to run the our Kubernetes Ingress Controller externally to your Kubernetes cluster, which obviates the need for running another load balancer in front. This technique is worth a look if you require low latency since it involves fewer network hops, or if you want to run HAProxy outside of Kubernetes for other reasons. You must handle making this setup highly available, though, such as by using Keepalived.

HAProxy Enterprise Load Balancer powers modern application delivery at any scale and in any environment, providing the utmost performance, observability, and security for your critical services. Organizations harness its cutting-edge features and enterprise suite of add-ons, which are backed by authoritative, expert support and professional services. Ready to learn more? Sign up for a free trial.