HAProxy is a powerful API gateway due to its ability to provide load balancing, rate limiting, observability and other features to your service endpoints. It also integrates with OAuth 2, giving you control over who can access your APIs. In this blog post, you’ll see how.

In the previous blog post, Using HAProxy as an API Gateway, Part 1 [Introduction], we touched upon how simple it is for you to evade that proverbial avalanche of complexity by setting up an immensely powerful point of entry to your services—an API gateway. HAProxy creates a unified front that clients can connect to, distributing requests to your backend without breaking a sweat, allowing you to operate at any scale and in any environment. HAProxy, at the same time, provides best-in-class load balancing, advanced DDoS and bot protection, rate limiting and observability.

The second part of our API gateway series focuses on how to authenticate and authorize users that want to connect. After all, APIs provide direct access to backend systems and may return sensitive information such as healthcare, financial and PII data. Recent data breaches due to API vulnerabilities have hit organizations as large as Amazon and the USPS. APIs often expose create, update and delete operations on your data too, which shouldn’t be open to just anyone.

In this post, we’ll demonstrate how HAProxy defends your APIs from unauthorized access via JWT access tokens and shrinks the attack surface that you might otherwise expose. You’ll learn how HAProxy can be extended with Lua, which provides a flexible way to integrate with other tools, protocols, and frameworks.

Let’s begin with a scenario where you have an API to protect. For example, let’s say that this API provides methods related to listing hamsters up for adoption. It has the following API endpoints:

This fictitious API lets you view available hamsters, add new hamsters to the list, and remove the furry critters after they’ve been adopted to loving homes. For example, you could call GET /api/hamsters like this:

This would be consumed by your frontend application, perhaps through Ajax or when loading the page. For requests like this that retrieve non-sensitive information, you may not ask users to log in and there may not be any authentication necessary. For other requests, such as those that call the POST and DELETE endpoints for adding or deleting records, you may want users to log in first. If an anonymous user tries to call the POST and DELETE API methods, they should receive a 403 Forbidden response.

OAuth 2 is a protocol that authenticates a client and then gives back an access token that tells you whether or not that client is authorized to call your API. By and large, the concept of identity doesn’t play a big part in OAuth 2, which is mostly concerned with authorization. Think of it like going to the airport, and at the first gate you are meticulously inspected by a number of set criteria. Upon inspection, you are free to continue on to your terminal where you can buy overpriced coffee, duty-free souvenir keychains and maybe a breakfast bagel. Since you’ve been inspected and have raised no red flags, you are free to roam around.

In a similar way, OAuth 2 issues tokens that typically don’t tell you the identity of the person accessing the API. They simply show that the user, or the client application that the user has delegated their permissions to, should be allowed to use the API. That’s not to say that people never layer on identity properties into an OAuth token. However, OAuth 2 isn’t officially meant for that. Instead, other protocols like OpenID Connect should be used when you need identity information.

As we described in Part 1 of this series, an API gateway is a proxy between the client and your backend API services that routes requests intelligently. It also acts as a security layer. When you use HAProxy as your API gateway, you can validate OAuth 2 access tokens that are attached to requests.

For simplifying your API gateway and keeping the complicated authentication pieces out of it, you’ll offload the task of authenticating clients to a third-party service like Auth0 or Okta. These services handle logging users in and can distribute tokens to clients that successfully authenticate. A client application would then include the token with any requests it sends to your API.

After you’ve updated HAProxy with some custom Lua code, it will inspect each request and look at the token that the client is presenting. It will then decide whether or not to allow the request through.

In this article, we won’t focus on how a client application gets a token. In short, you’d redirect users to a login page hosted by a third-party service like Auth0 or Okta. Instead, we’ll highlight how to validate a token. You will see how HAProxy can inspect a token that’s presented to it and then decide whether to let the request proceed.

If you’re curious about what the JWT data looks like, you can use the debugger at https://jwt.io to decode it. 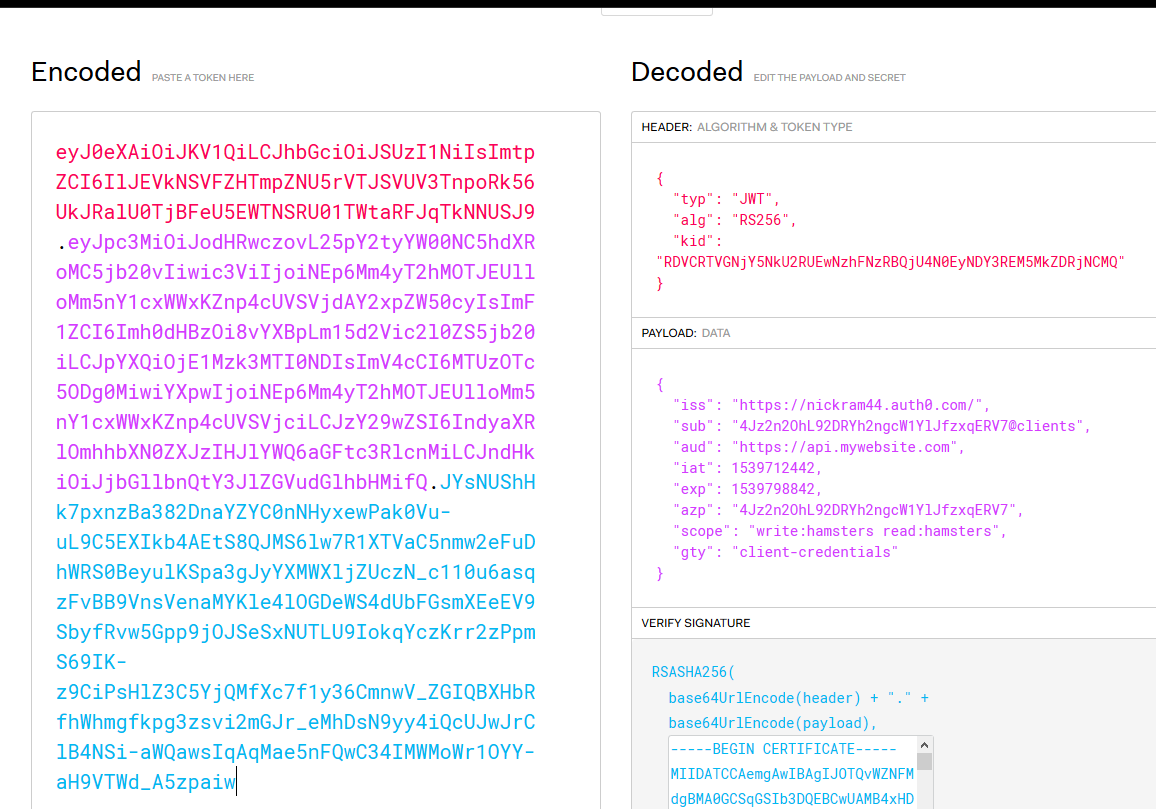 Some interesting fields to note are:

To test it out, sign up for an account with Auth0. Then, you can use curl to craft an HTTP request to get a new token using the client credential grant flow. POST a request to https://{your_account}.auth0.com/oauth/token and get an access token back. The Auth0 website gives you some helpful guidance on how to do this.

Here’s an example that asks for a new token via the /oauth/token endpoint. It sends a JSON object containing the client’s credentials, client_id and client_secret:

You’ll get back a response that contains the JWT access token:

In a production environment, you’d use the client credentials grant workflow only with trusted client applications where you can protect the client ID and secret. It works really well for testing though.

Now that you have a token, you can call methods on your API. One of the benefits of OAuth 2 over other authorization schemes like session cookies is that you control the process of attaching the token to the request. Whereas cookies are always passed to the server with every request, even those submitted from an attacker’s website as in CSRF attacks, your client-side code controls sending the access token. An attacker will not be able to send a request to your API URL with the token attached.

In the next section, you’ll see how HAProxy can, with the addition of some Lua code, decode and validate access tokens.

Before an issuer like Auth0 gives a client an access token, it signs it. Since you’ll want to verify that signature, you’ll need to download the public key certificate from the token issuer’s website. On the Auth0 site, you’ll find the download link under Applications > [Your application] > Settings > Show Advanced Settings > Certificates. Note, however, that it will give you a certificate in the following format:

This contains the public key that you can use to validate the signature, but also extra metadata that can’t be used. Invoke the following OpenSSL command to convert it to a file containing just the public key:

This will give you a new file called pubkey.pem that is much shorter:

A lua-load directive loads a Lua file called jwtverify.lua that contains code for validating access tokens. It gets this from the JWT Lua code repository.

Next, the frontend receives requests on port 443 and performs various checks by invoking the jwtverify.lua file. Here we’re using ACL statements to define conditional logic that allows or denies a request. ACLs are a powerful and flexible system within HAProxy and one of the building blocks that make it so versatile.

The first http-request deny line rejects the request if the client did not send an Authorization header at all. The next line, http-request lua.jwtverify, invokes our Lua script, which will perform the following actions:

The next http-request deny line rejects the request if the Lua script did not set a variable called txn.authorized to a value of true. Notice how booleans are evaluated by adding the -m bool flag.

The next two lines reject the request if the token does not contain a scope that matches what we expect for the HTTP path and method. Scopes in OAuth 2 allow you to define specific access restrictions. In this case, POST and DELETE requests require the write:hamsters permission. Scopes are optional and some APIs don’t use them. You can set them up on the Auth0 website and associate them with your API. If the client should have these scopes, they’ll be included in the token.

To summarize, any request for /api/hamsters must meet the following rules:

With this configuration in place, you can use curl to send requests to your API, attaching a valid token, and expect to get a successful response. Using this same setup, you’d lock down your APIs so that only authenticated and approved clients can use them.

In the blog post, you learned more about using HAProxy as an API gateway, leveraging it to secure your API endpoints using OAuth 2. Clients request tokens from an authentication server, which sends back a JWT. That token is then used to gain access to your APIs. With the help of some Lua code, HAProxy can validate the token and protect your APIs from unauthorized use.

Did you find this article helpful? Want to stay up to date on similar topics? Subscribe to our blog! Also, follow us on Twitter for other HAProxy news. You can also join the conversation on Slack.

HAProxy Enterprise comes with a number of preinstalled Lua modules and makes it easy to add your own, as it comes bundled with the Lua runtime. Request a free trial or contact us to learn more! Our expert support team has experience setting up Lua modules and can help provide a tailored approach to your needs.