DNS for Service Discovery in HAProxy

HAProxy 1.8 and newer allows you to use DNS service discovery to detect server changes and automatically apply them to your configuration.

HAProxy is a mature, high-performance software component that’s been reliably serving the load balancing and ADC markets for over 15 years now. Over time, the role and functionality required from HAProxy has evolved significantly. When HAProxy was first released, application architectures were quite static and very few configuration changes occurred during runtime. Nowadays, to satisfy the requirements of modern cloud and microservices architectures, an ADC must be very flexible and it must respond to changes in its environment during runtime. Typically, this includes the requirements to:

This is especially important in environments such as Amazon AWS or Kubernetes, where a scheduler is monitoring the CPU and memory usage on individual backend servers and can decide to expand or reduce the service footprint at any given point in time.

One way to update the HAProxy configuration during runtime is through the HAProxy’s Runtime API. That topic was nicely covered in one of our previous blog posts – Dynamic Scaling for Microservices with the HAProxy Runtime API.

Another way to update the configuration during runtime is by using DNS for service discovery, which will be explained in this post.

According to Wikipedia: “[Service discovery] is the automatic detection of devices and services offered by these devices on a computer network”.

In essence, a service registry is used to monitor the network and maintain an accurate list of nodes where individual services are available. This allows other components in the network to perform efficient service discovery even when changes in configuration occur very often (such as in cloud or microservices environments).

The methods that client components use for querying service discovery systems for information can vary. Two typical ones are:

Why DNS for Service Discovery?

There are a couple advantages to using DNS for service discovery:

The disadvantages of using DNS for service discovery are:

The following section provides a summary of the DNS related features in HAProxy.

In HAProxy 1.5, we’ve added the ability to resolve server hostnames to IP addresses using the system’s libc resolver (and the resolve.conf file). The resolution was done at startup and it couldn’t be repeated at runtime since the libc’s getaddrinfo() call is a blocking call, and it would break the even-driven nature of HAProxy.

In HAProxy 1.6, we’ve introduced a full implementation of an event-driven DNS client that was able to perform DNS resolutions and update HAProxy during runtime. The resolution that was happening during configuration parsing was still required and was done by the libc’s getaddrinfo() call mentioned above.

Only CNAME, A, and AAAA response types were supported, and the runtime resolutions were triggered by the check task (no health checks meant no runtime DNS resolution). Also, each resolution was autonomous and atomic; there was no caching and multiple DNS resolutions for the same hostname were running in parallel.

And finally, in HAProxy 1.8 (which is expected to have a stable release in November 2017), we have introduced support for SRV query types, EDNS payload size (DNS responses up to 8K), and a dedicated timer for obsolete records. Since this version, the DNS resolution task is also autonomous and works independently of the servers’ health checks, and a DNS response cache exists (multiple objects needing to resolve the same hostname consume one query and use the same response).

The SRV records are contained in the ANSWER section of the DNS responses and have the following structure:

Where the description of the fields is as follows:

Usually, the DNS server will also return the resolution for the targets mentioned, and it will provide that information in the ADDITIONAL SECTION.

Enable DNS service discovery by first adding a resolvers section to your HAProxy configuration. This allows HAProxy to query the given nameservers and continually check for updates to the DNS records. For example, suppose you had a DNS nameserver running at the IP address 192.168.50.30 on port 53. Your resolvers section would look like this:

A resolvers section sits at the same level as the global, defaults, frontend and backend sections.

Next, add a backend that will contain your dynamically discovered servers. Use the server-template directive to create the template for the servers that will be added. It looks like this:

The server-template directive will add the specified number of servers, which in this case is five, to the backend. Their names will be prefixed with web. Note that the resolvers parameter points to the resolvers section we added. The init-addr none parameter allows HAProxy to start up, even if it can’t resolve the hostname right away. That’s really useful for dynamic environments where the backend servers may be created after HAProxy starts.

Let’s say that your nameserver resolved the hostname myservice.example.local to three IP addresses.

DNS A records resolve a hostname to IP addresses

The server-template adds these servers to your configuration. It’s equivalent to adding a backend to HAProxy that looks like this:

Since the change is only reflected in memory, you won’t see it when inspecting the configuration file. However, you can use the HAProxy Runtime API’s show servers state servers command to see the servers that the server-template generated. First, be sure to enable the Runtime API by adding a stats socket directive to your global section:

Then invoke the Runtime API to see the servers that are loaded into memory:

Here you can see that five servers were added: web1, web2, web3, web4 and web5. The DNS records returned IP addresses for only three servers, though. So, the last two lines show a dash where the IP address would be.

You can also see these on the HAProxy Stats page. Enable the Stats page by adding a frontend section that looks like this:

Then view the page at port 8404. In this case, I have only one server that is actually listening. So only the first server is green. The next two show as having failing health checks and are in the DOWN state. The last two, which weren’t assigned IP addresses, are in maintenance mode.

Using DNS A records gives you each server’s IP address, but you must hardcode the port. You can also configure HAProxy to query for DNS SRV records in order to set the port in addition to the IP address. An SRV record returns a hostname and port number.

First, you’ll need to change the A records so that instead of having a hostname, myservice.example.local, resolve to multiple IP addresses, each A record will have a different hostname, such as host1, host2 and host3. Then, add the same number of SRV records and configure them to resolve a service name, such as _myservice._tcp.example.local, to the hosts you defined in your A records.

For example, suppose your DNS server returns three A records and three SRV records, as shown:

Here, the SRV records for the _myservice._tcp.example.local service resolve to host1 at port 8080, host2 at port 8081 and host3 and port 8082. The A records resolve the IP addresses for these hosts.

Now when you invoke the show servers state servers Runtime API command, it shows both the IP address and port for each server:

This is equivalent to adding a backend to HAProxy that looks like this:

When you add more SRV and A records to your nameserver, they will automatically be added to the backend, filling in the web4 and web5 slots.

If you would like to use DNS for service discovery before waiting for the stable release of HAProxy 1.8, please see our HAProxy Enterprise – Trial Version or contact HAProxy Technologies for expert advice on how to best integrate the solution into your existing infrastructure.

In parallel with continuous technical work and improvements, we are also planning on publishing further blog posts describing effective use of HAProxy in microservices environments and integration of HAProxy with 3rd party tools and orchestration systems. 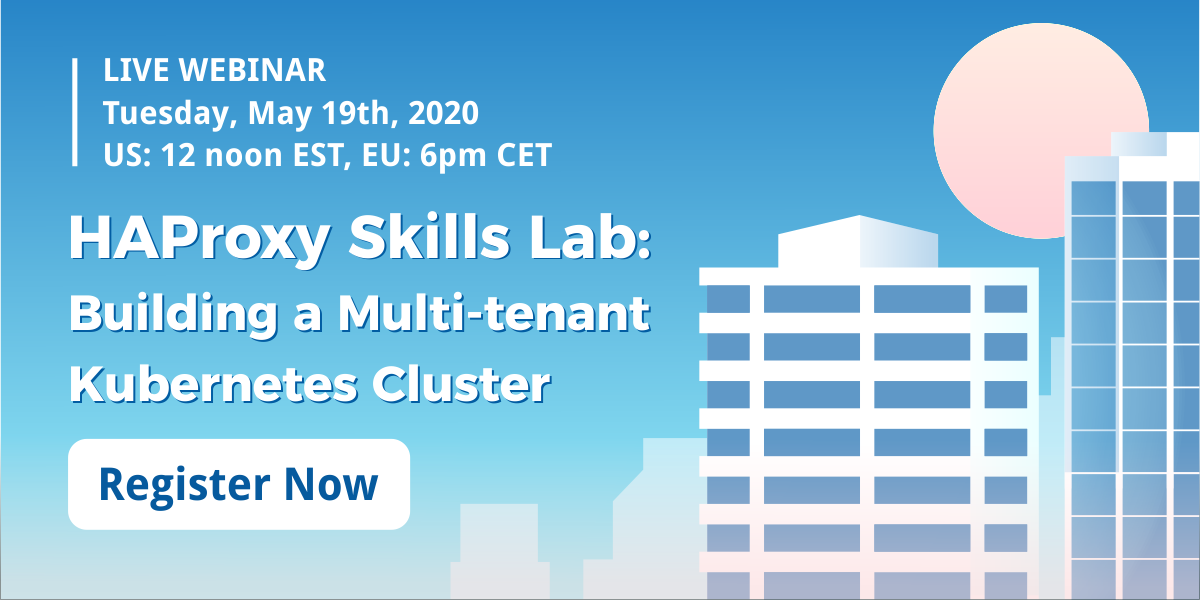