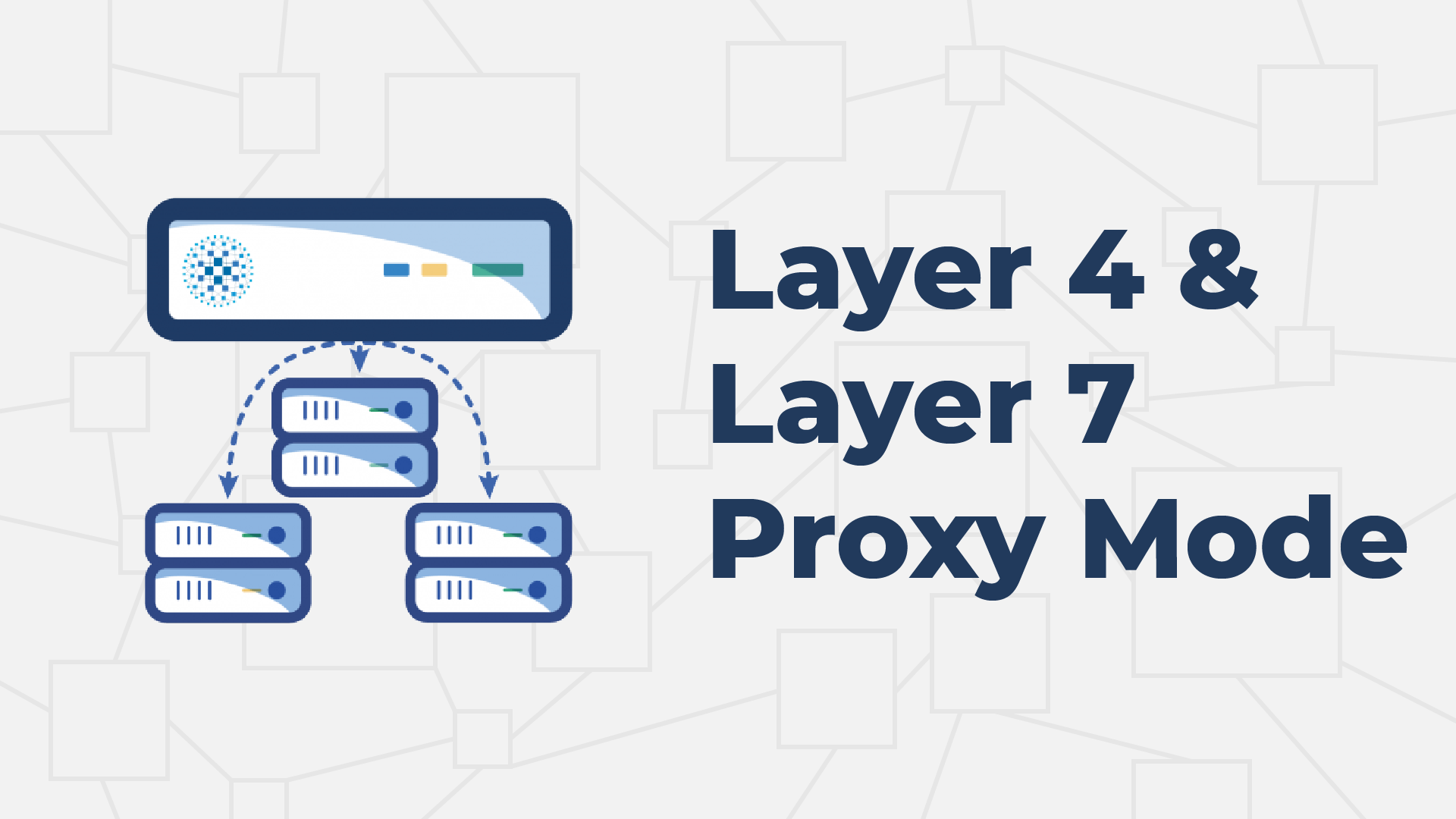 The OSI model is really just a way to simplify how one thinks about a network and the components that reside within it. It’s made up of seven layers, each responsible for a different set of functions, but all interconnected with one another. Here are the seven layers:

I’ve listed them in descending order because the upper layers rely on the layers below. At the bottom, the Physical layer represents the cables, electrical signals, radio waves, and other tangible or measurable aspects that make up a network. At the top rests the most intangible layer, the Application layer, which contains high-level protocols like HTTP, which browsers and web servers use to exchange web pages. In between, the layers serve various functions including linking computers on a network, assigning computers unique addresses, and interpreting messages using the right encoding. To get a better understanding of the OSI model, I recommend this video by Mike Meyers.

HAProxy can be switched into TCP mode, which corresponds to layer 4, or HTTP mode, which corresponds to layer 7, by setting its mode directive in the HAProxy configuration. Which mode you choose will change the features available to you. That’s what makes the OSI model so helpful. It categorizes the software in terms of where it fits in the strata of a network and lets you know what functionality you can expect.

Configure HAProxy to be a layer 4 proxy by setting its mode directive to tcp, as shown in this configuration snippet:

Here, the mode is set in a defaults section so that it applies to any listen, frontend and backend sections that follow. You can also set it in any of those sections too to override what you set in the defaults section. Beware that a frontend and a backend, which form the two halves of the proxied connection—from the client to HAProxy and from HAProxy to the server(s)—must have the same value for mode.

Layer 4 of the OSI model is the Transport layer. It’s responsible for transferring data across a network. One of the most common protocols used here is the Transmission Control Protocol (TCP). TCP chops a message up into segments and then sends them from a source computer to a destination. The sending and receiving computers may have several conversations going on with multiple computers at the same time. For that reason, each communication stream is assigned a unique IP address and port number combination so that those conversations can happen in parallel without colliding.

When HAProxy runs in this mode, it has access to which IP address and port the client is trying to connect to on the backend server. It intercepts the messages by standing in for the server on the expected address and port. For example, if the client expects to connect to port 3306, HAProxy will listen on that port and relay the messages to the server. However, because HAProxy stands in the middle, the server is free to listen on some other IP and port.

Proxying at this layer is lightweight and fast because it is only concerned with transport. HAProxy doesn’t read the messages, it only acts as a courier passing messages back and forth. Yet, it can still add a lot of benefits including health checking servers, hiding your internal network from the public Internet, queuing connections to prevent server overload, and rate limiting connections. It works well for load balancing services that communicate over TCP such as database traffic to MySQL, Postgres and Redis servers.

Configure HAProxy to be a layer 7 proxy by setting its mode directive to http, as shown in this configuration snippet:

Layer 7 is the Application layer, but it doesn’t mean application in the typical sense. It refers to the underlying protocol that an application uses, such as how a web server uses HTTP to bundle a web page. At this layer, HAProxy can make routing decisions based on any detail of a message that’s defined in layers 4 through 7. That includes all of the following:

In this mode, you get what you had with mode tcp, but more. You can choose a pool of servers based on information found in the SSL handshake, such as SNI fields. Or you can route to a specific set of servers based on the requested URL path. Or you can route based on the HTTP headers received, such as the host or cookie headers. HAProxy can make smarter decisions in this mode, but it still performs at lightning speed. This mode is ideal for load balancing web applications, as you might have guessed.

The benefits of using this mode include being able to route based on higher-level protocols, the opportunity to alter HTTP messages as they pass through, more sophisticated health checking, and the ability to rate limit requests. Other features include setting new request or response headers on message as they pass through HAProxy, issuing HTTP redirects, enabling Basic authentication, and introducing cookie-based server persistence.

At this point, we’ve covered the two modes in which HAProxy operates. Next, check out our blog post The Four Essential Sections of an HAProxy Configuration to get a feel for the other elements commonly found in a configuration file when setting up load balancing.

With HAProxy, you have the choice of proxying traffic at layer 4 (TCP) or layer 7 (HTTP). The former is great for load balancing non-HTTP services, such as databases, whereas the latter is perfect for load balancing web applications. This versatility means that HAProxy is capable of load balancing many types of services, not just web servers. It also opens the door to a lot of the advanced functionality found only in a layer 7 proxy. Note that a single instance of HAProxy can proxy and load balance many services at once, and some of them can operate in TCP mode while others run in HTTP mode simply by setting mode differently in their respective sections.