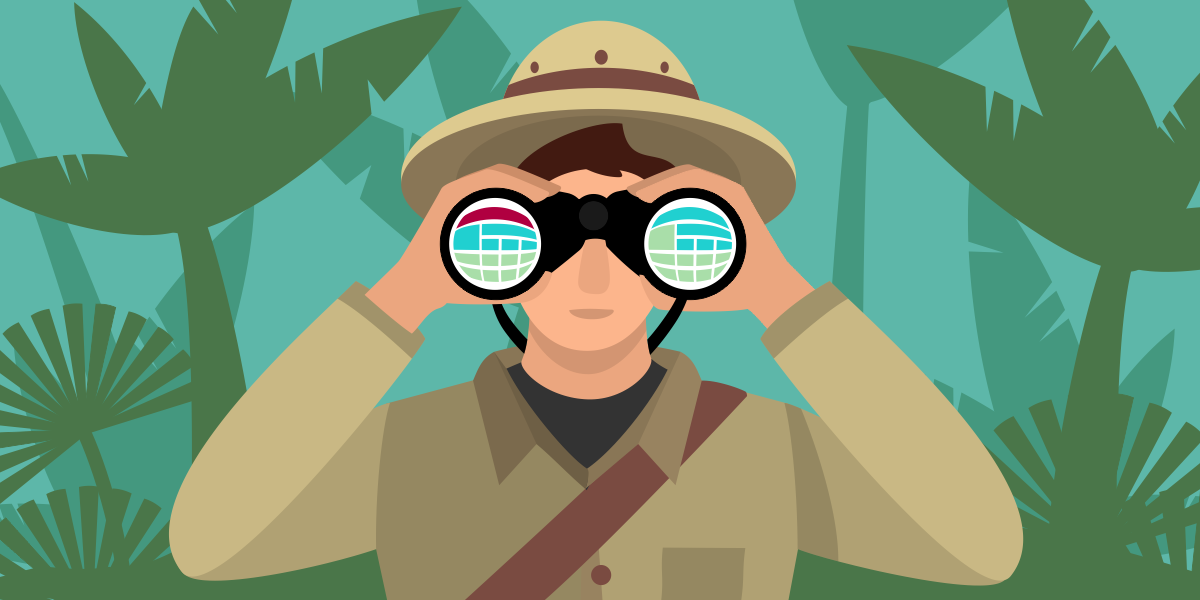 The HAProxy Stats page provides a near real-time feed of data about the state of your proxied services.

In a previous blog post, Introduction to HAProxy Logging, you saw how to harness the power of HAProxy to improve observability into the state of your load balancer and services by way of logging. HAProxy also ships with a dashboard called the HAProxy Stats page that shows you an abundance of metrics that cover the health of your servers, current request rates, response times, and more. These metrics give you granular data on a per-frontend, backend, and server basis. You only need to add a stats enable directive, which is typically put into its own frontend section.

The bind line sets which address and port you’ll use to access the dashboard. The optional stats uri line changes the URL’s path. The stats refresh line configures how often the dashboard will automatically refresh within your browser.

You can also put servers into maintenance mode or drain traffic from them using this screen. For that, you would add the stats admin line and restrict who can access these functions via an ACL statement. You can also set this to stats admin if TRUE to bypass the restriction. Optionally, add a stats auth <username:password>  line to enforce Basic authentication.

With this in place, you can visit the /stats URL on port 8404 to see the dashboard: 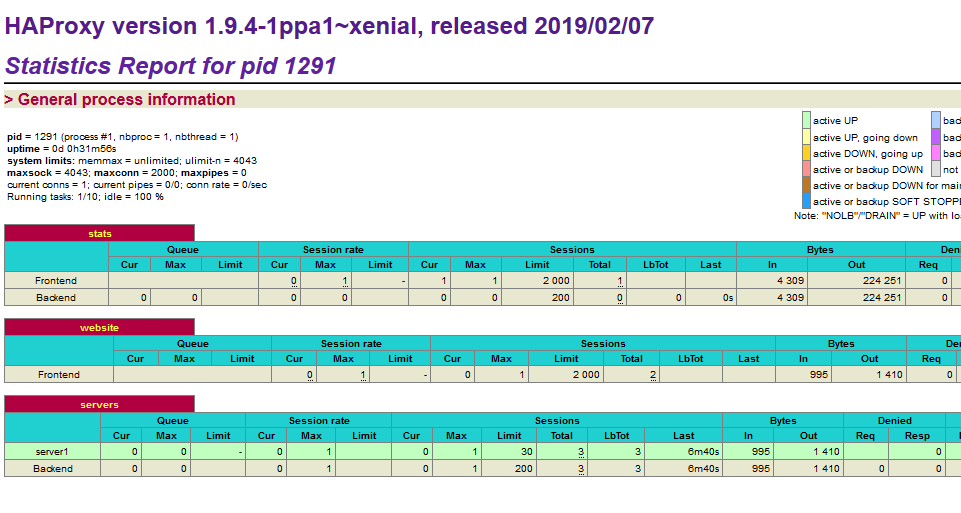 The HAProxy Stats page gives you a near real-time feed of information that you can use to troubleshoot proxied services, get insights about your traffic, and watch the load placed upon your servers. However, the metrics are labelled using shorthand names and prefixes. Before you can fully make use of them, you need to understand what they mean. In this blog post, you’ll tour the Stats page and learn what each section shows.

In this first section, we’ll explore the statistics related to frontends. A frontend is what a client connects to. As requests enter the load balancer—and as responses are returned to the client—they pass through the frontend. So, it has access to end-to-end timings, message sizes, and health indicators that encompass the whole request/response lifecycle.

The Session rate section, in the context of a frontend, describes the rate at which clients are connecting to HAProxy.

The Cur column shows the current rate at which client sessions, or fully established connections between client and server, are being created. If you hover your mouse over this field, the page displays the following drilldown metrics:

The Max column shows the most sessions that have ever been in use simultaneously. If you hover your mouse over this field, the page displays the following drilldown metrics:

The Limit column shows the maximum number of sessions per second that the frontend will accept, as set by the rate-limit sessions setting. If this limit is exceeded, additional connections are kept pending in the socket’s backlog (in system buffers).

In the context of a frontend, the Sessions section counts the number of sessions, or full client-to-server connections, in use on the load balancer.

The Limit column shows the most simultaneous sessions that are allowed, as defined by the maxconn setting in the frontend. That particular frontend will stop accepting new connections when this limit is reached. If maxconn is not set, then Limit is the same as the maxconn value in the global section of your configuration. If that isn’t set, the value is based on your system.

When you hover over the Total column, the page displays the following drilldown metrics:

The LbTot and Last columns are not used in this section.

In the context of a frontend, the Bytes section displays the cumulative amount of data sent and received between HAProxy and downstream clients.

The Denied section shows the number of requests and responses that were rejected because of security concerns.

The Req column shows the number of requests that were denied due to any of the following configuration directives placed in the frontend or listen section:

The Resp column shows the number of responses that were denied by an http-response deny directive that was placed in the frontend or listen.

In the context of a frontend, only the Req column is used in the Errors section. It shows the number of requests that encountered an error.

The only field from the Server section that applies to a frontend is the Status field.

When Status is OPEN, the frontend is operating normally and ready to receive traffic. You can disable the frontend, which will change its status to STOP, by executing the disable frontend Runtime API command. Here’s an example of calling that command:

Use the enable frontend command, which has the same syntax, to change the frontend’s status back to OPEN.

A backend is a pool of load-balanced servers. HAProxy sends requests to a backend and then receives a response from one of the active servers. Statistics here include information about the health of each server, timings related to queuing, connecting, and getting a response, and requests rates.

The Queue section applies only to backends and shows how long clients are waiting for a server to become available. HAProxy is able to queue connections when you use the maxconn setting. This reduces strain on your backend servers.

In the context of a backend server, a session means the same as a connection. These statistics show the rate at which connections are being made to a server.

In the context of a backend, the Sessions section shows the number of current connections to any of the active servers.

The backend row shows the value of fullconn for Limit or, if not set, it uses the following formula: Sum of the Sessions Limit values for frontends that route to this backend, divided by 10. So, if you have two frontends that each have a limit of 1000, their sum would be 2000. Divide that by 10 to get the value 200 for the limit for this backend.

The Total column shows the cumulative number of connections that have used the given server. When you hover over this field, a dropdown displays the following drilldown metrics:

The LbTot column shows the total number of times the given server was selected to serve a request. This can be due to normal load balancing or because of a redispatch from a failed server. The Last column shows the time since the last connection was received. At the bottom of this section, in grey, the metrics are summed and reported for the backend overall.

In the context of a backend, the Bytes section displays the amount of data sent and received between HAProxy and the upstream server.

The Denied section shows the number of requests and responses that were rejected because of security concerns.

The Req column only applies to the backend as a whole. It shows the number of requests that were rejected by any of the following configuration directives in a backend:

The Resp column shows the number of responses that were rejected for any given server due to any of the following configuration directives in a backend:

The bottom row shows the sum of these individual server metrics.

Errors shows the number of errors related to communicating with a backend server.

The Req column is not used. The Conn column shows the number of requests that encountered an error while trying to connect to the server. For example, if you shut down a server while HAProxy had already begun to connect, then you would see this number rise. Health checks will remove the server from the rotation eventually.

The Resp column shows errors encountered while getting the response. For example, closing the connection with tcp-response content close will increase this count.

The Warnings section in a backend displays the number of retries and redispatches.

In the context of a backend, the Server section shows various details about the status, health and weight of each server.

The Status column displays whether the server is currently up and for how long. It can display any of the following statuses:

The LastChk columns shows a value like L7OK/200 in 1ms. That particular value means that a Layer 7 health check was performed; it returned an HTTP 200 OK response and it did so within 1 millisecond. Or, if you see L4OK in 0ms, that means that HAProxy was able to make a Layer 4 connection to the server.

If you’ve added a slowstart parameter to a server line, then when you disable and later enable that server, the Thrtle column shows the percentage of traffic the server will accept. The percentage will gradually rise to 100% over the period you’ve set.

Our Enterprise users get to enjoy an evolution of the Stats page: the Real-Time Dashboard.

It provides an aggregated view of your services’ health, request rates, and statistics. In addition, it facilitates administrative tasks such as enabling, disabling and draining backends, exploring your stick tables with the Stick Table Aggregator and much more.

In this blog post, you were taken on a tour of the HAProxy Stats page. You learned what each field means in the context of a frontend or backend section. A great deal of information is contained on this dashboard and now you’ll know how to make full use of it!

Want to keep up to date on similar topics? Subscribe to this blog! You can also follow us on Twitter and join the conversation on Slack. HAProxy Enterprise includes a robust and cutting-edge codebase, an enterprise suite of add-ons, expert support, and professional services. Want to learn more? Contact us today and sign up for a free trial.