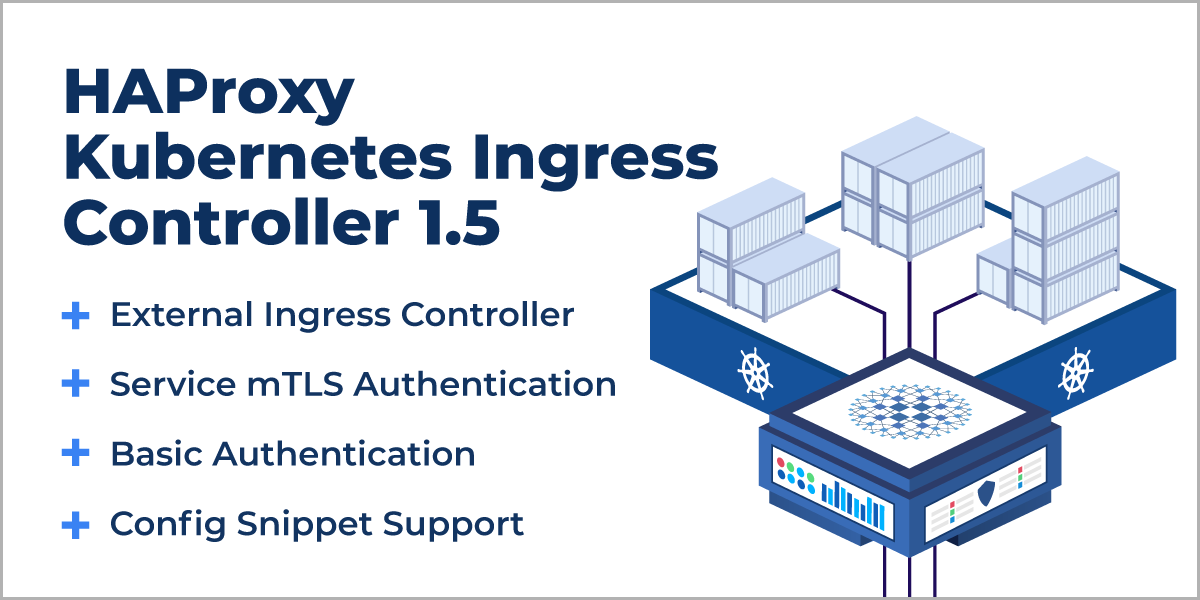 We’ve released version 1.5 of the HAProxy Kubernetes Ingress Controller. This version unlocks access to the raw HAProxy configuration language for power users to gain more control. You can also enable mutual TLS authentication between the ingress controller and services, enforce Basic authentication, and return custom error pages to users. This version also enhances the controller’s internals, resulting in a more efficient HAProxy configuration, and behind the scenes, HAProxy has been upgraded to version 2.3.

It also provides a way to run the ingress controller outside of your Kubernetes cluster, but still, monitor the cluster for changes to pods. Some teams prefer this approach as they transition their applications to the container platform. You can launch the controller on a separate server and give it access to the pod network.

This release would have been impossible without all of the hard work from everyone in the open-source community involved, both on GitHub and Slack.

According to the official Kubernetes documentation:

Applications running in a Kubernetes cluster find and communicate with each other, and the outside world, through the Service abstraction.

The ingress controller itself runs as a Kubernetes service. Service relies on kube-proxy to route requests to the pods where the application is running, on whichever node that is. However, some users wish to bypass the Kubernetes Service layer in order to have fewer proxies or packet filters for a request to cross. So, one of the possible solutions is to run the ingress controller and HAProxy instance outside of the cluster like a more traditional reverse proxy.

While this solution trades off scalability—which is one of the main reasons to run applications inside Kubernetes—it does offer a smoother way to migrate existing infrastructure to Kubernetes. You can start to migrate applications into Kubernetes, but keep HAProxy instances outside of it, along with the high availability solution you choose (e.g. Keepalived).

Running an ingress controller outside of the Kubernetes cluster can also be quite useful for debugging, proof-of-concept, CI/CD pipelines, etc., for those who prefer to avoid containers. All you need is:

The last requirement can be as simple as adding a route like this to your server, where <node-ip> is the IP address of one of the cluster nodes reachable from where HAProxy is running:

To run the ingress controller outside of Kubernetes, you can start it using the following command:

For information on how to customize our ingress controller, check out our Kubernetes Ingress Controller Arguments documentation page.

This version adds support for mutual TLS authentication (mTLS) between the ingress controller and the backend servers it routes traffic to. Mutual TLS authentication is not a protocol, but rather a security practice that ensures that both parties in a TLS session—the client and the server—trust each other. It means that when the client and server communicate over TLS, the client verifies the server’s identity by checking that its TLS certificate was signed by a known Certificate Authority (CA); Simultaneously, the client sends to the server its own certificate so that the server can verify the client’s identity. That way, both sides can inspect the other’s certificate before agreeing to continue. In this case, the ingress controller is the client to the backend servers.

Here is an example that demonstrates setting these annotations in a Service definition:

If you don’t want to verify the server’s certificate, you can use the older server-ssl annotation to establish a TLS connection to the server without certificate verification.

The ingress controller’s position in front of your services makes it the ideal place to implement security measures like authentication. That’s because it fulfills the role of an API gateway, where all traffic flows through it. You can offload complex work to this layer and it will cover all of your services.

In version 1.5, we’ve added support for Basic HTTP authentication. This form of authentication displays a login prompt whenever a client first tries to access a service. To enable it, set the auth-type annotation to basic-auth on either your ConfigMap or Ingress definition. Add the auth-secret annotation, which specifies a Kubernetes secret that contains usernames and their passwords in the form of username: encrypted and base-64 encoded password.

Although the passwords are encrypted when stored, Basic authentication credentials are passed in the clear when used, so you should always enable TLS to encrypt communication when using it.

One of the benefits of using an ingress controller is that it hides the details of how the underlying load balancer is configured. Instead of editing HAProxy’s configuration file, haproxy.cfg, by hand, you can simply add annotations to your Kubernetes Ingress, Service, or ConfigMap files and apply them with kubectl. This annotation syntax is succinct. It boils down the load balancer functionality to its essence. For instance, to enable SSL with a redirect from HTTP to HTTPS, you would add these annotations to your Ingress definition:

This simplicity makes configuring advanced load balancing features convenient for users. In fact, you don’t even need to learn the HAProxy configuration language to use the HAProxy Kubernetes Ingress Controller. The annotations provide good enough coverage for most use cases. Sometimes, the annotations do extra work behind the scenes, such as how the ssl-certificate annotation will not only apply the certificate but also monitor its status and update the binding if it changes.

However, HAProxy power users prefer having the full configuration language at their disposal. In this version of the ingress controller, you can now insert raw HAProxy directives into the underlying configuration, which unlocks features that have not been exposed as annotations. Use global-config-snippet in the ingress controller’s ConfigMap to add directives to HAProxy’s global settings, which is where you would apply rules that affect all routes and services.

In the following example, we add four global directives: ssl-default-bind-options, ssl-default-bind-ciphers, tune.ssl.default-dh-param and tune.bufsize, which are just a few of the settings available:

You can also apply directives to a backend in the HAProxy configuration. A backend defines a pool of servers to which requests are routed. The ingress controller abstracts away this concept, but Kubernetes Services map to backends, and the two are roughly analogous. Add a backend-config-snippet annotation to a Service definition, as shown below:

Here, we add a stick-table that stores the client’s IP address and the URL they’ve requested. From this, we track each client’s request rate per URL using http-request track-sc0 and enforce a rate limit using http-request deny. These are all directives only available with access to HAProxy’s powerful configuration language. The ingress controller already provides the rate-limit-requests annotation to enable rate-limiting based on IP address, but with config snippets, you have more control, such as to set different rate limits for different URLs.

There isn’t a way to add snippets to a frontend in the HAProxy configuration. The reason is that the ingress controller manages routing rules and other settings in the frontend section. It’s preferable to avoid pushing raw configuration there to avoid conflicts with the controller’s internal operations.

Under some circumstances, HAProxy generates certain HTTP errors. For example, it replies with a 403 Forbidden response when a request is denied by a http-request deny rule. Or, it replies with a 503 Service Unavailable response when there is no server available to handle the request. The new --configmap-errorfile controller argument lets you return a custom error message for a given HTTP response status code.

First, add a ConfigMap that defines the HTML you’d like to return for a given status:

Then, pass the --configmap-errorfile argument with the name of the ConfigMap when creating the ingress controller:

In addition to the main features discussed above, several other annotations were added:

An important part of the work during this release was to enhance the ingress controller’s internals. One aspect of that effort was to update the code to rely more on HAProxy Map files since doing so greatly simplifies the configuration that’s rendered.

Take a look at the configuration below, which was generated before the enhancements. It’s too verbose. We have a use_backend rule for every ingress rule and a long combination of ACLs ending the http-request deny and http-request capture lines:

With version 1.5, the same inputs create a dramatically different configuration:

The use_backend and http-request lines now rely on lookups of data from HAProxy Map files and this provides better readability and a more efficient configuration. Since we can update HAProxy Map files at runtime without a reload, we end up with fewer reloads.

Here’s how the example above works for routing to the correct service based on the host header:

which will be used to select the corresponding backend and HAProxy rules.

During this release cycle, the controller code was refactored and reorganized in order to split it into different modules (store, annotations, HAProxy rules/maps, etc.) for easier maintenance and contributions going forward.

Last but not least, unit and end-to-end tests were added.

The HAProxy Kubernetes Ingress Controller 1.5 release brings some exciting features that let you control the underlying configuration, enable authentication mechanisms, define custom error pages, and even run it outside of the Kubernetes cluster. We plan for the next release to leverage even more of HAProxy’s capabilities via Kubernetes Custom Resource Definitions. Stay tuned!