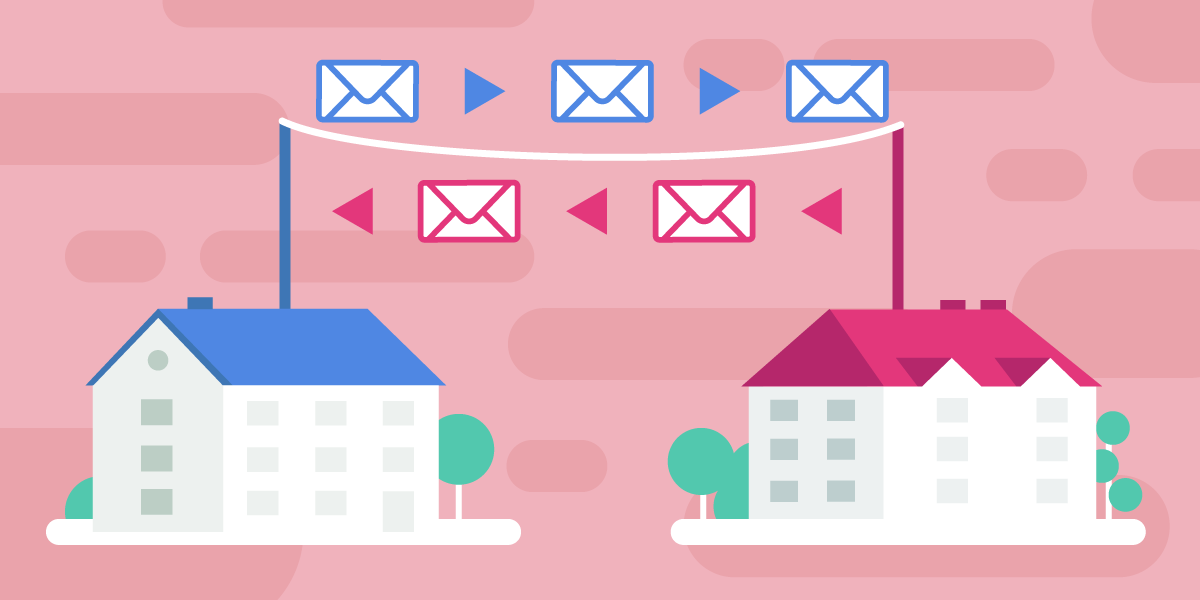 Persistent connections allow HAProxy to optimize resource usage, lower latency on both the client and server side, and support connection pooling.

HTTP is a layer 7 protocol that’s transmitted over a TCP connection. It works in a client-server model and follows the request-response paradigm, which means that a client sends a request to a server, which then replies with a response.

From this statement, you can infer two different ways of operating. Either the TCP connection used for the communication between the client and the server is opened for a single request-response exchange, or it is kept open for a while and both parties can use it for multiple requests and responses.

This diagram highlights this in a simpler way: 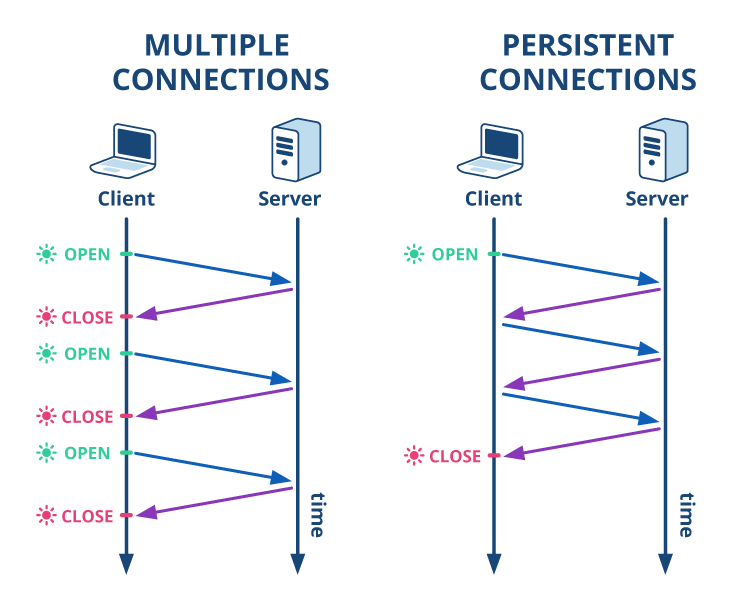 The diagram above clearly shows some advantages to keeping a persistent TCP connection open for multiple HTTP requests:

This blog article will focus on persistent TCP connections in an HTTP world and how HAProxy supports it.

History of Keep-alive in HTTP

Before describing how HAProxy supports persistent connections, let’s recall the history of the HTTP Keep-Alive feature and how it has evolved over time. As you may know, HTTP is a session-less protocol. Each request and response sequence is independent from each other, which means that, on its own, HTTP requires each request to have its own connection. To make it more efficient, we need HTTP Keep-Alive. HTTP Keep-alive is the mechanism that instructs the client and server to maintain a persistent TCP connection, decoupling the one-to-one relationship between TCP and HTTP, effectively increasing the scalability of the server.

The HTTP 1.0 protocol does not support persistent connections by default. In order to do so, the client has to send a Connection header with its value set to keep-alive to indicate to the server that the connection should remain open for any subsequent requests. That said, this is not a hard and fast rule and the server can close said connection after the first response—or any response actually. In short, the keep-alive mode in HTTP 1.0 is explicit. Both the client and server have to announce it.

HTTP 1.0 is very old (almost 25 years old) and is almost no longer used on the Internet.

HTTP 1.1 supports persistent connections by default. There is no need to send the Connection header field to announce support for keep-alive. Each party expects that the peer supports it, although it is possible for any peer of the transaction to change this behavior by sending a Connection: close header. A persistent connection can be closed after any full response is sent or after some time when the connection has become idle, the purpose of which is to save resources on the server side.

Because HTTP 1.1 relies on persistent connections, you can use it to send multiple queries in a row and expect responses in the same order. This is called HTTP pipelining, which is demonstrated in the next diagram: 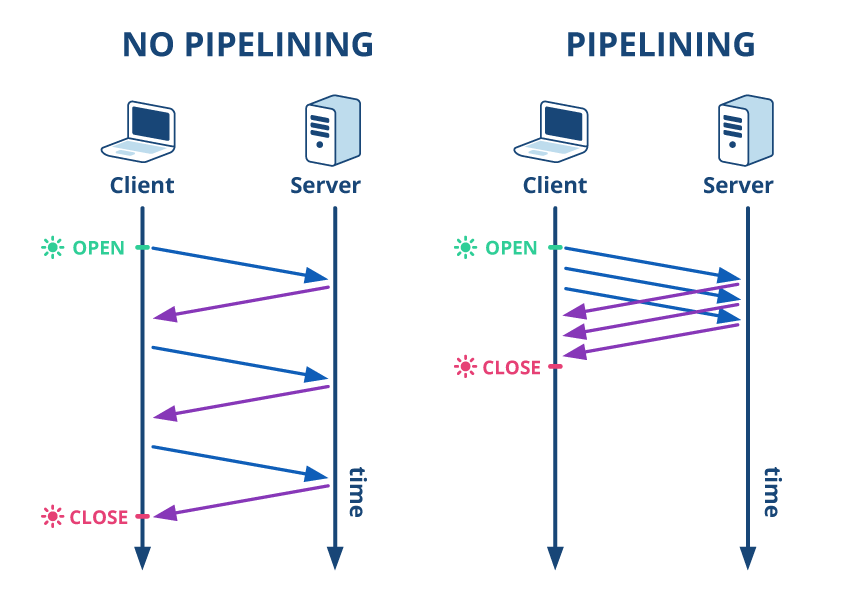 With pipelining, the browser can send multiple requests across a single persistent connection, which allows the benefits of persistent connections to flourish. However, the drawback is that requests must queue up on the connection until the requests in front of them complete. This is called head-of-line blocking. To download content faster from web servers, browsers usually open up to six TCP connections per destination domain name and download objects in parallel over each of them.

The keep-alive mode in HTTP 1.1 is implicit. Both the client and server should support it by default, although it’s not an error to not support it.

With HTTP/2, the HTTP protocol has been totally redesigned. Its primary goal is low latency with full request and response multiplexing. First, the Connection header is now forbidden and all clients and servers must persist connections. Second, a client can send multiple requests in parallel on the same connection, which is called multiplexing.

HTTP/2 introduced the notion of a stream, which allows a bidirectional flow of bytes to be exchanged over a persistent TCP connection. Each stream can carry one or more messages. A message is a complete sequence of frames that map to a logical request or response. Frames are the smallest unit in the architecture and each frame embeds headers or data. Read this article to learn more about the HTTP/2 protocol.

HAProxy is a reverse proxy, also defined as a Gateway in the HTTP 1.1 specification. It has to connect clients to servers, even when each party speaks a different version of HTTP. HAProxy can allow an HTTP 1.1 client to communicate with an HTTP/2 server or vice-versa, for example. Whatever the scenario is, HAProxy will ease communication.

HAProxy supports persistent connections for the following versions of HTTP:

Reverse proxies stand between the clients and the servers and, of course, they have to follow the HTTP rules (RFC) for each version of the protocol. That said, since a reverse proxy collects the traffic of many users, it may not want to “mix” them over the same connection in some cases. Persistent connections between HAProxy and the server are flagged as “private” in the following cases:

Even though HAProxy supports persistent connections on the server side, it will follow transparently and safely the principle of “private” connections for the cases described above.

There is one small drawback though: If there is a TLS SNI field to be sent to the server, defined by sni <expression>, the connection is marked as private, up to HAProxy 2.2.

HAProxy 2.3 improves this. It marks the connection as private only if the SNI is set using a variable expression. In the following HAProxy configuration example, the SNI field sent to the server comes from the variable expression hdr(Host), which extracts the value from the HTTP Host header. This causes the connection to be marked private. However, it is not marked private when you use the str function, which sends a hardcoded string value:

There is a plan to provide connection pooling per sni in a future release of HAProxy, so that all connections with a variable SNI will not be marked as private anymore.

Keep-alive and server side connection pooling

As a reverse proxy, HAProxy has a strategic position in the architecture—between clients and servers. It benefits greatly from persistent connections in both directions. The cherry on top is that on the server side HAProxy can keep idle connections open for the next client, so there’s less wasted time and resources.

This behavior is managed by placing an http-reuse directive in a backend section, which can take the following values:

Note that in the tables below, HAProxy does not show its full potential because…

For these reasons, the performance number is totally useless as a raw value, but it can still be useful to compare the impact of persistent connections and the advantages of the HTTP/2 protocol framing model. I’ve marked the Number of HTTP requests completed in 1 minute column with an asterisk to indicate this.

Scenario 1: Connection close on the client side

In this scenario, I instructed hey, which acts as the client, to close the connection after each response. This is the worst-case scenario!

I ran six tests in total, two for each of the three operating modes of http-reuse:

With both HTTP protocols, setting http-reuse to always provides much better results. That said, thanks to the streaming model of HTTP/2, aggressive mode provides good results as well with that protocol.

Scenario 2: Persistent connection on the client-side

In this scenario, I instructed hey to keep the connections persistent for all 50 users. This is the best-case scenario!

I ran six tests in total, two for each of the three operating modes of HTTP-reuse:

Conclusion on the tests

From these tests, we can draw these conclusions about HAProxy’s http-reuse feature:

The magic behind the curtain of http-reuse is that HAProxy will manage a pool of TCP connections with the servers. Re-using already established connections allows you to get better performance from the network layer, hence the benefits for the application layer.

To manage the pools of connections, HAProxy provides multiple parameters that can be set on a server line in a backend section:

Since HAProxy 2.2, there is a very useful command available in the HAProxy Runtime API: show servers conn. It provides live information about the number of connections and their state per server for each backend, as well as the number of idle connections per thread, and more. The information you get from this command will help you when setting the parameters seen above.

The server directive’s maxconn parameter is a very well-known feature of HAProxy. It can be used to protect servers against traffic spikes by routing requests to other servers or by queueing requests within HAProxy.

The server’s maxconn parameter was created at a time when HAProxy did not support keep-alive nor manage a connection pool (back in 2006, around HAProxy 1.2.X). At that point in time, one connection was equivalent to one request being processed by the server. So a maxconn of 100 meant that 100 requests at most could be processed in parallel by the server. By “limiting” the number of concurrent connections processing on the server, we could ensure that the server remained responsive, which was much faster than opening thousands of connections.

In this blog post, you learned that HAProxy supports persistent connections in its various forms depending on the version of HTTP. While HTTP 1.0 and 1.1 made use of the Connection header to enable or disable persistence, HTTP/2 always expects persistent connections. HTTP/1.1 introduced the concept of pipelining to send multiple requests over a single connection in sequence, but HTTP/2 gave us multiplexing, which allows browsers to send multiple requests in parallel over a single connection.

HAProxy leverages persistent connections on the server-side to support connection pools, wherein idle connections to backend servers can be reused among clients. You can control the behavior of the connection pool by setting the http-reuse directive in a backend section. Benchmarks indicate that setting it to always is typically best. Fine-tune it more with the pool-low-conn, pool-max-conn, and pool-purge-delay parameters on a server line.

Finally, you learned that the maxconn setting has evolved over time. In the beginning, it controlled how many connections to establish with a server. Nowadays, it indicates how many requests to send at once. With connections being reused, this fits better with the amount of work you’re truly sending.