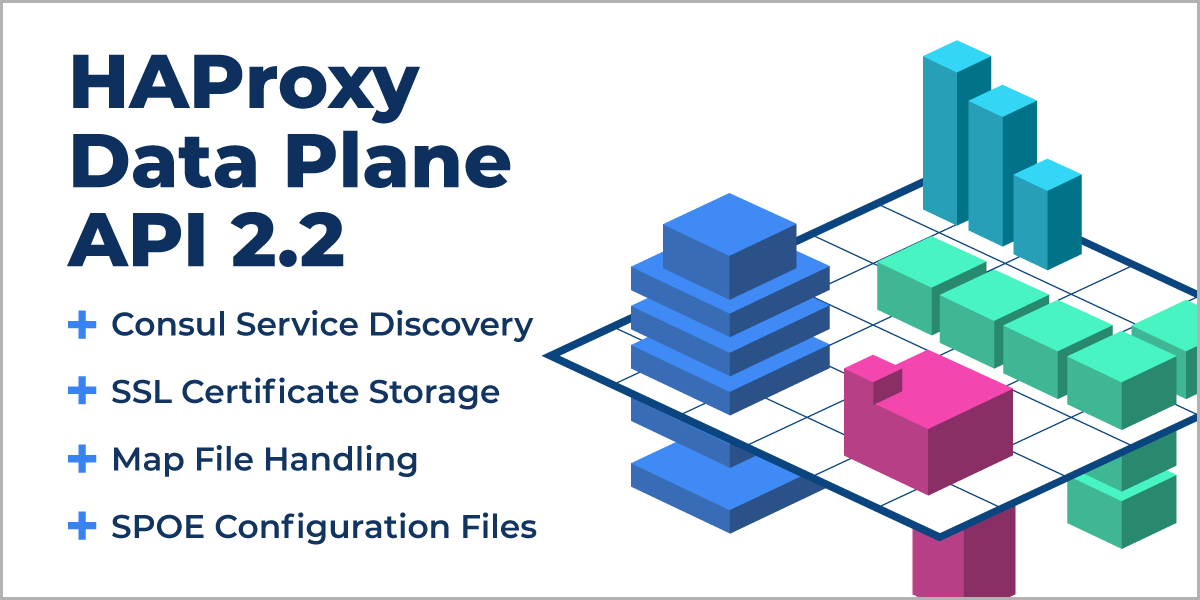 We’re excited to announce the release of the HAProxy Data Plane API 2.2. With this milestone, we accomplished two major objectives. The first was to expand HAProxy’s service discovery options. Many HAProxy users already rely on Consul, HashiCorp’s service networking solution, to automatically detect new service nodes and relay their locations to other nodes within the network. With this release, you can now register the Data Plane API as a Consul client and pull node information down to a running instance of HAProxy. Entire backends and the list of servers within them will be populated in the HAProxy configuration on-the-fly.

Another accomplishment was expanding the Data Plane API’s scope to manage files outside of HAProxy. While the core of HAProxy’s load balancing functionality is configured using a single file, haproxy.cfg, there are other files that HAProxy reads at startup and during the course of its operation. SSL certificates and keys hold the cryptographic data that allows HAProxy to encrypt traffic; Map files list key-value pairs that enable dictionary-style lookups that HAProxy can use when deciding how to route traffic, apply rate limiting, and activate servers; SPOE configuration files outline the format HAProxy should use when passing messages to external programs.

This latest release of the HAProxy Data Plane API allows you to manipulate these files remotely. This pushes the API towards being more than a simple configuration API. It makes it a one-stop shop for configuring your entire load balancer platform.

Consul is a service networking solution that allows for discovery of services across any cloud or runtime. HAProxy is no stranger to integrating with Consul. Previously you could leverage Consul template to generate load balancer configurations or connect HAProxy’s DNS Service Discovery to Consul’s DNS servers to pull IP addresses. The HAProxy Data Plane API has also been used to integrate with the Consul service mesh.

With this release, the Data Plane API becomes a Consul client that pulls configuration data from Consul servers. A new endpoint /service_discovery/consul allows you to add, remove, and update the API’s registration to a Consul server. You can quickly get started by sending the following request:

Note: Not shown is the ability to pass a token when adding the new Consul server with the token parameter.

This will configure the HAProxy Data Plane API to continuously poll the Consul server for new backends (services) and servers (nodes). Because the API uses the HAProxy Runtime API to accomplish certain dynamic tasks, it will add and remove servers during scale up and scale down events without requiring a reload.

The backends will be named using the following format:

For example, consider the above demonstrated command where our Consul server is named consul.local. If we had a service named API then the backend would be named consul-backend-consul.local-8500-api.

To store an SSL certificate you would send a request with the certificate’s path set with the file_upload POST parameter. Here you can see that it returns the path where the file was uploaded on the HAProxy server and a storage name:

You would then take the path that was returned in the file field and use that as the value for the ssl_certificate parameter you pass when invoking the bind API endpoint to create a bind line in your configuration.

For now, this does not yet harness the Runtime API capabilities for dynamic SSL certificate storage that were added in HAProxy 2.2 but we can envision this being a feature introduced within the next release of the Data Plane API. Changes to SSL certificates through the Data Plane API also currently do not trigger an automatic reload so if you require the new certificate to take effect immediately, you can force an HAProxy reload by adding a force_reload=true query parameter to reload immediately, or by making a configuration change that forces a reload.

To update an existing SSL certificate and reload HAProxy, append the storage name to the end of the endpoint URL, add the force_reload parameter, and call it using the PUT verb:

An HAProxy map file stores key-value pairs and is the springboard for some inventive behavior including routing traffic based on the Host header, setting different rate limiting thresholds depending on the URL, and blue-green deployments where one backend is marked active while another is rotated to standby. This release adds a new endpoint /services/haproxy/storage/maps/, which lets you view, create, update, and remove map files from the HAProxy server.

To demonstrate, we’ll start with creating a basic map file that does backend routing based on the HTTP Host header. Create a file named hosts.map and add the following contents to it:

Now we’ll store it as a new map file on the HAProxy server:

When adding a map file as shown above, you will get a message returned:

managed but not loaded map file (no runtime ID)

This is because you need to use the map file within the configuration. Let’s add a use_backend rule that uses it by invoking the /services/haproxy/configuration/backend_switching_rules endpoint:.

After applying the above routing rule, if you make a request to the endpoint /services/haproxy/storage/maps you will see the following returned:

To upload an existing SPOE file, invoke the /services/haproxy/spoe/spoe_files endpoint:

To build one from scratch, use this recipe:

In addition, the 2.2 version includes the following changes:

The HAProxy Data Plane API version 2.2 adds service discovery capabilities with a native Consul integration. It also introduces file handling and storage support for SSL certificates, map files, and SPOE configuration files. The API continues to get better thanks to the active community surrounding it. If you’d like to get involved, head over to our GitHub repository to learn more!