New and/or improved features in HAProxy Enterprise 2.3r1 include:

The connection layer was optimized to reduce the number of syscalls.

Listeners have been reworked and related structures have been reorganized to better suit the new design. File descriptors are no longer manipulated by the listener layer.

TCP keepalive lets the Linux kernel know when a peer on the other end of a connection has stopped responding and that it's safe to close the idle connection. It discovers this by sending probes. If the peer doesn't reply, the socket is closed automatically.

You can change the number of probes to send, the interval at which to send them, or how long to wait before starting to send probes on both the client and server side through the following parameters:

A new section called log-forward can bind on TCP using the bind keyword and on UDP using dgram-bind for both IPv4 and IPv6.

You can thus create a syslog listener over UDP or TCP that can forward, prioritize, and translate syslog messages to a pool of UDP or TCP syslog servers.

When combined with the log sampling feature added in HAProxy Enterprise 2.0, you get granular control over how your syslog messages are forwarded.

You can also translate syslog messages from one format to another.

If the balance random algorithm returns a server whose maxconn value has been reached, meaning that connections are now queuing up for that server, it will add the request to the backend's queue and not the server's queue. The request can be redispatched to another available server, and typically the fastest.

For some load-balancing algorithms (roundrobin, static-rr, leastconn, first), requests were queued in the backend due to a previous attempt at finding a suitable server after trying all of them. Now, the next request skips the part where each server is tried and goes directly to the backend's queue.

The leastconn algorithm has been improved to take the queue length into account when dispatching requests. This means that if a server has a lot of queued requests we won't hammer it with extra connections.

This directive instructs HAProxy Enterprise how long it should cache the response.

The cache now supports the ETag, If-None-Match, and If-Modified-Since.

The cache can return an HTTP status code 304 instead of the full object.

HAProxy Enterprise will now also reject any configuration that has a duplicate cache section name.

added-res.cache_hit and res.cache_name tell you whether a response came from the cache and, if so, the name of the cache used.

If you load SSL/TLS certificates separately from the certificate key through the ssl-load-extra-files global directive, the key no longer needs to be named the exact same as the certificate with .key appended to it.

The new global directive ssl-load-extra-del-ext instructs HAProxy Enterprise to remove the certificate file's extension before adding a new one.

For example, the key can be named mycert.key instead of mycert.crt.key.

Reusing connections that hardcode the SNI to the backend server

If the SNI is hardcoded on the server line using, as an example, sni str(example.local) there's no risk in reusing the connection. This release allows reusing connections that hardcode the SNI to the backend server. It will mark connections as private only if you've configured a variable expression for the SNI.

If a crt-list does not end with a new line, a warning indicates that the file might have been truncated.

The new show stat Runtime API command's option domain, allows you to change the context of the statistics. The proxy default value displays the core proxy statistics that were available before. The dns value displays statistics related to DNS resolution that HAProxy Enterprise performs.

New field under the Wght column in the Stats page

Filter on servers that are up or not in maintenance mode

The show stat Runtime API command now allows you to use show stat up to filter on servers that are up or show stat no-maint to show those that are not in maintenance mode.

The Prometheus exporter received some new process and per-server metrics, as outlined here:

A typo has been fixed for the haproxy_process_frontend_ssl_reuse metric.

The Runtime API's show stat output has been extended and adds a new delimiter, a dash ("-"), after which additional dynamic fields can be added. Those fields won't be shown unless the relevant component is in use.

The following build changes were added:

HAProxy Enterprise 2.3r1 is an unsupported and deprecated version. 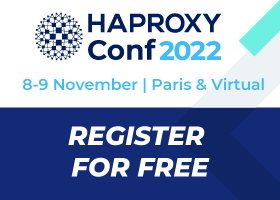